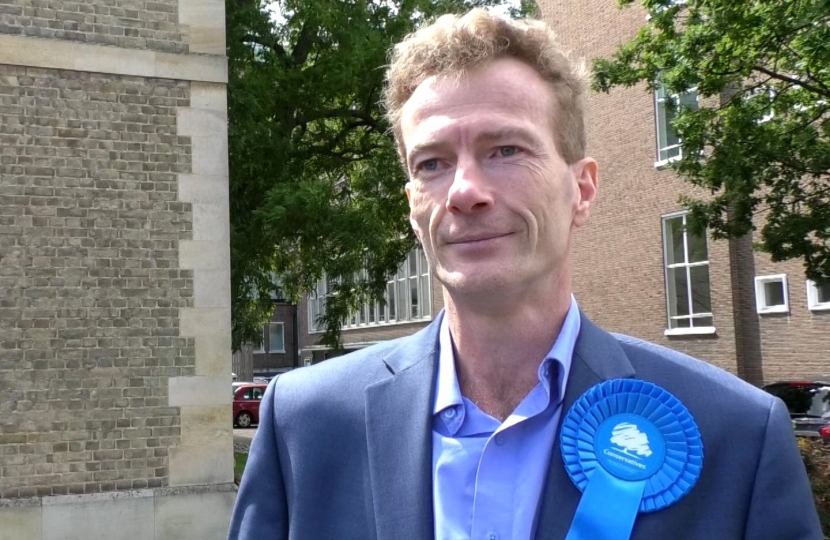 Former geneticist and Conservative Parliamentary Candidate for Cambridge, Dr John Hayward, was invited to talk about the challenges and opportunities of the coming Brexit negotiations with staff at the University of Cambridge Chemistry Department.

Concerns were expressed by some staff about how the university will continue to be able to attract the best talent from across the European Union after the country takes control of its borders.  John assured them that nobody in government is talking about pulling up the drawbridge. He stressed the importance of a flexible as well as controlled immigration policy and that, just as academics are currently able to travel to conferences and partner with colleagues in North America, so too we will continue to enjoy close partnerships with our colleagues across Europe after we leave the E.U. in 2019.

John told the group that Conservatives recognise that our long-term prosperity depends upon science, technology and innovation. He shares his party's ambition that the UK should be the most innovative country in the world.

"I am delighted that the Conservative manifesto is committed to increasing investment in research and development to meet the current OECD average – that is, 2.4 per cent of GDP – within ten years, with a longer-term goal of three per cent," he told the group. "We will also increase the number of scientists working in the UK and enable leading scientists from around the world to work here."

Theresa May has clearly set out in her twelve negotiating objectives the need to preserve the rights of EU citizens living in the UK, as well as that of British citizens living in Europe; the need to maintain free trade with European markets, as well as being able to form new trade agreements with other countries; and the desire to ensure Britain (and, John adds, Cambridge) remains the best place for science and innovation.

John talked about the Conservatives' continued support of research into the diagnosis and treatment of rare cancers and other diseases, including Genomics England's work in decoding 100,000 genomes. As the manifesto explains, "This, together with the development of stronger research links with the NHS, can help scientists and doctors design more effective and personalised treatments, and help maintain our position as the European hub for life sciences."

The group of staff and researchers seemed fairly representative of the city at large, being split between pragmatists who want to ensure we get the best Brexit deal we can for the city and those who fear the worst.

John observed that he is "the only choice for the 50 percent of Cambridge voters who accept that, irrespective of how the majority of us voted last year, we now need to secure a good and fair Brexit deal for the city, as well as for the country, continent and wider world."  All of the other candidates on the ballot paper, including the two ex-MPs, are determined to reopen last year's divisive battles. In a recent hustings, the two ex-MPs even admitted that, despite the euro-zone crisis, they would ultimately like to see the UK give up the pound and join the euro!

John's experience of working constructively with the Prime Minister's Policy Board and Government Ministers means that he will be a strong and effective champion in Westminster to secure a good and fair deal for Cambridge throughout the Brexit negotiations and beyond.

As the pro-European East of England MEP, Vicky Ford, has noted that "John brings an understanding of how the academic, scientific and voluntary sectors all contribute to the rich mosaic of Cambridge."