Darker Side of Politics Exposed 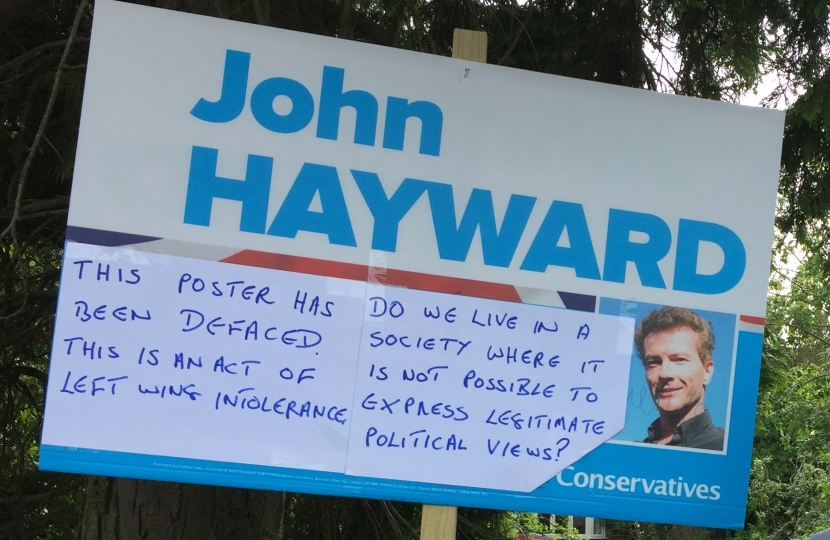 Conservative Parliamentary Candidate‎ for Cambridge, Dr John Hayward, has warned that Cambridge is ceasing to be a safe space for free speech and public debate.  John spoke out after evidence emerged that Labour Party activists in Cambridge were co-ordinating on social media to deface and remove posters from other political parties.

Students at both the University of Cambridge and Anglia Ruskin University have reported feeling as though they are unable to express their political beliefs without being subject to ridicule or abuse.

John Hayward noted that, after two different hustings‎, Conservative-minded voters have told him, "I guess I shouldn't be seen talking to you for much longer," as though someone might inform on them or even later assault them.

Several Conservative Party members have apologised to John that they do not want to display a poster for the Party, explaining, "Not this time. The thing is, last time it was vandalised and it was quite unpleasant."

The majority of John Hayward’s Conservative Party posters that have been erected across the city have been, at best, removed or defaced within 24 or 48 hours.  In several cases, they have been left standing but vandalised with offensive and hateful abuse.  Locally-known Labour Party activists have been caught indiscreetly discussing their plans to target the Conservative posters with lead pipes and paint on social media pages visible to the public.

John Hayward warns, “Such reactions are not signs of a healthy democracy.  They remind me of responses I have seen overseas in authoritarian states and in countries where supporters of opposition parties are subject to violence, loss of government contracts and unfair dismissal from their jobs.”

Has the “Marketplace of Ideas” Failed?

The Conservative candidate has spent much of his adult life promoting freedom, tolerance and critical thinking abroad. He has lived and worked in the former Soviet Union and has helped to encourage greater civic participation and representation in newly-emerging and developing democracies around the world—from eastern Europe, across the Middle East, Africa, Asia, South America and the Caribbean.

“I have worked with politicians from all the mainstream political parties in this country.  It is therefore depressing to discover how left-wing extremists in this country are causing people to feel intimidated and marginalised because of their mainstream political views,” John says. “You would have thought that this great university‎ town, of all places, should be a haven for free speech.  I am speaking out because I want to help expose such extremism for what it is: a threat to our very way of life and the freedoms for which previous generations have so sacrificially fought.”

Another Cambridge voter wrote an unsolicited and unprompted email to John last week to express her own concerns about what she called “the rise of Momentum and its bullying tactics”.  She wrote, “The change in tone on online newspaper and discussion forums in the last week or so is quite shocking. There have always been people who oppose the Conservatives on these forums. However, what is happening now is of a different order of magnitude.  It is a very disturbing way to carry out a campaign, particularly the absolute intolerance of opposing points of view. I fear a Corbyn win will cement this trend in British politics, and it is really not a good one.”

If, as another student suggested, it is true that the “marketplace of ideas” has failed, then the Prime Minister was absolutely right when she said after Saturday's terrible terrorist attack in London, “While we have made significant progress in recent years, there is – to be frank – far too much tolerance of extremism in our country. So we need to become far more robust in identifying it and stamping it out – across the public sector and across society. That will require some difficult and often embarrassing conversations, but the whole of our country needs to come together to take on this extremism.”