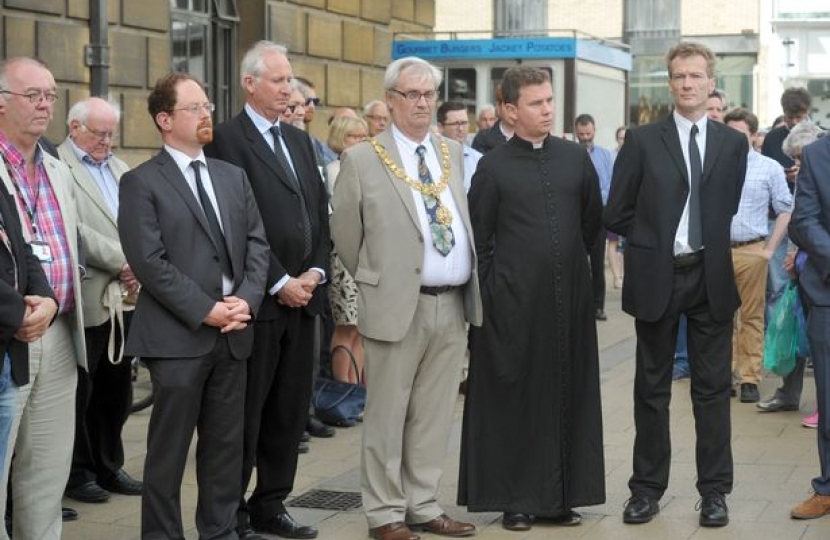 Yesterday, before and after Cambridge's 11am vigil for Manchester at the Guildhall, several journalists asked me for my thoughts. This is what I told them.

The attack in Manchester is absolutely devastating.

I have lived and travelled extensively in civil war zones and know many individuals, families and communities whose lives have been torn apart by murderous atrocities. I have also been in cities that have undergone shelling by rebel forces and where bombs have gone off in public markets. I know and understand the lasting impact that such experiences have on people who come through them. The lives of all those who were affected by the Manchester bombing will be changed forever and they should be the focus of our prayers.

Yet, I would highlight the positives that have already come out of this. Firstly, we should celebrate the remarkable and sacrificial work of the emergency services, armed forces and security services. All too often we take them for granted, but they are the first to head into unknown danger when others flee. None of us know how many terrorist plots have been thwarted thanks to their diligence, but we owe them all a huge debt of gratitude.

Secondly, we can celebrate how it is at times such as this that communities really come together. Here outside the Guildhall in Cambridge, in vigils up and down the country, and indeed across the world, people today are uniting. There is a recognition that we all have more in common than those things about which we disagree. Most of us who go into public service do so because we want to help our communities and society better places in which to live and work. Although we may disagree about how best to achieve that, most of us are motivated by a desire to help everyone to flourish and to fulfil their potentials.

Thirdly, just as I saw overseas, and people from Northern Ireland know, when such atrocities happen, most people just want to get on with their lives. While it is right that we respectfully suspend election campaigning for a short time, it is also right that we all "stay calm and carry on". Those perverted individuals who carry out mass slaughter of other fellow humans are opposed to the principles of freedom and democracy that most of us typically take for granted.

I regularly work with international politicians from newly-emerging and developing democracies to promote greater transparency and wider participation in their political systems. The UK is known as a beacon for freedom and democracy. It is therefore vital that we do not allow people of violence to force us from the public square or civic arena. Those who are opposed to freedom and democracy only have to succeed once to hit the headlines. Yet, the response we have seen from our great city and across our great country to what happened in Manchester shows that people are determined: the freedoms that have been hard-won for us by previous generations do matter; our generation does still treasure them; and we will defend them for the generations that follow.