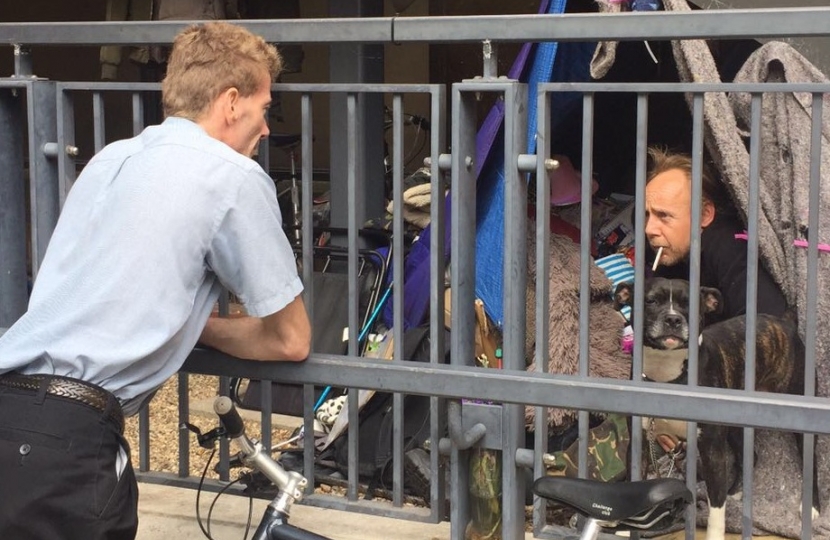 Conservative candidate for Cambridge, John Hayward, took time out of campaigning on Sunday to join hundreds of other politicians across the country from all parties to remember Labour MP Jo Cox, who was murdered last June.

Jo’s widower Brendan Cox earlier told the media that the co-ordinated suspension of campaigning would send a message that “whatever our political disagreements, we really do hold more in common and show a united front against hatred and extremism in all its forms.”

Earlier in the week, John was impressed by a conversation with a homeless man who had just arrived in Cambridge, so John sought to engage further with the homeless on the streets of Cambridge.

Rough-sleeper Ian told John how he had served in the army for 14 years, in Bosnia and Afghanistan, and suffered from post-traumatic stress disorder but had been evicted from his home after complaints from his neighbours. John was able to tell him about a recently-established Cambridge charity, PTSD999, which provides support to people who have served in the Emergency Services and/or Military and suffered PTSD.

When asked what community leaders like John could do for people experiencing homelessness, Ian explained that “the Street Outreach teams have been helpful.” He continued, “But often people just give out leaflets with a list of organisations where homeless people can get help. Most of us already know about them all. And they are usually accompanied by a PCSO [police community support officer], which makes it intimidating. The police shouldn’t be so heavy-handed.”

The two shook hands as they parted, with Ian kindly remarking that he would vote for John if he could.

John has spent much of his life working to help disadvantaged communities in some of the poorest and toughest countries of the world—from the ’Stans of Central Asia, through Iraq to Zimbabwe.

Conservative investment over £500 million since 2010 has helped to prevent or relieve over one million cases of homelessness. The Government is supporting 84 projects through its £50 million Homelessness Prevention Programme, including a £20 million Rough Sleeping Grant funding for those at imminent risk of sleeping rough and £10 million for Social Impact Bond projects to provide personalised support for long-term rough-sleepers.

The Conservative manifesto commits to “halve rough sleeping over the course of the parliament and eliminate it altogether by 2027. To achieve this we will set up a new homelessness reduction taskforce that will focus on prevention and affordable housing, and we will pilot a Housing First approach to tackle rough sleeping.”