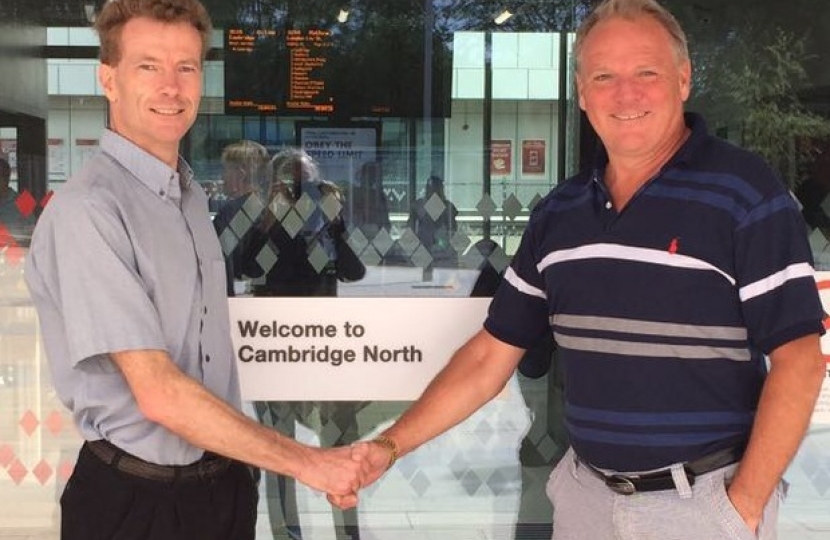 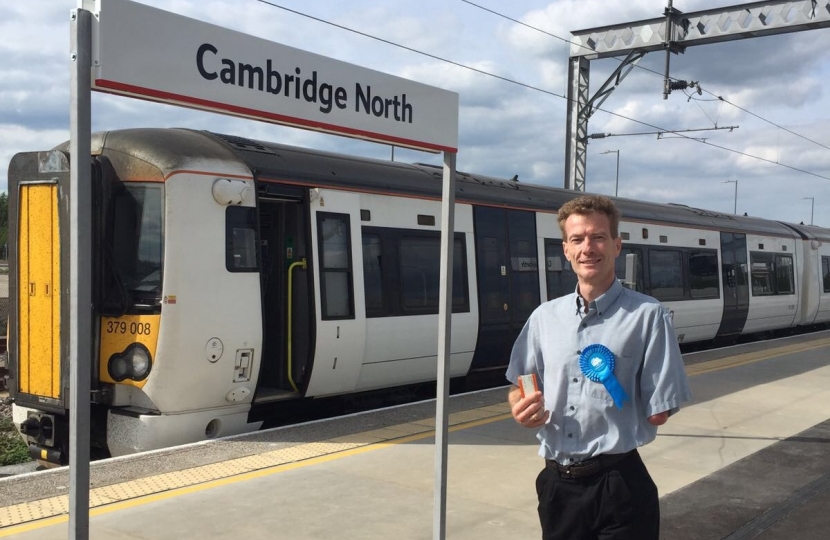 Conservative parliamentary candidate for Cambridge, Dr John Hayward, celebrated the first day of operation for Cambridge’s new station with the former Conservative Leader of Cambridgeshire County Councillor, Nick Clarke, whose initiative made the project a reality.

“As soon as I became leader of the council,” Nick explained to John, “I convened my cabinet and we discussed all the capital projects that really should have come forward but had failed to do so due to funding or lack of leadership. Cambridge North, the Chesterton Station, was the most obvious project which should have gone ahead. The payback times were short and something had to be done about congestion in Cambridge, so we approved the scheme and agreed to fund it.”

That was in 2011. Six years later, on Sunday 21 May, John was among many others who took a ride on one of the first trains from the new Cambridge North station to the city’s central railway station. The station is a short walk from Cambridge Science Park.

Nick stressed that the design was very utilitarian, with no unnecessary or costly frills, and explained that it had all been achieved at no cost to the public purse.

John said, “Conservatives in the region have an impressive track record in delivering new transport links for the county. Nick was instrumental in ensuring Cambridge North station was built so that residents who live and work in the area can travel freely around Cambridge and the wider area.”

A Manager from Greater Anglia, who did not want to be named, told John, “It’s exciting to see so many people coming to look around today. I guess it is not every day that a city gets a new station!”

Cambridge North is the first new station to be built in the city for over 170 years and has parking for 1,000 bikes and 450 cars.

John promised, “Cambridge is one of the most important cities in the UK. If elected on 8 June, I will work with government ministers to ensure that our city is not overlooked in Westminster. I will campaign to make sure we get the infrastructure, transport and housing needed to continue our economic success.”

He continued, “I know that success only comes when politicians work together as a team. So, as MP for Cambridge I will work with our newly-elected Mayor, James Palmer, and other elected representatives across the region to deliver transport and infrastructure solutions for Cambridge and the wider area that help to reduce congestion, protect the environment and improve the affordability of housing.”